I lucked out again with my 9-day fortnight, my Monday off being solid blue skies. Decided to have another bimble out to Tyrebagger, try a few different paths and perhaps find a few more of the features on the sculpture trail. 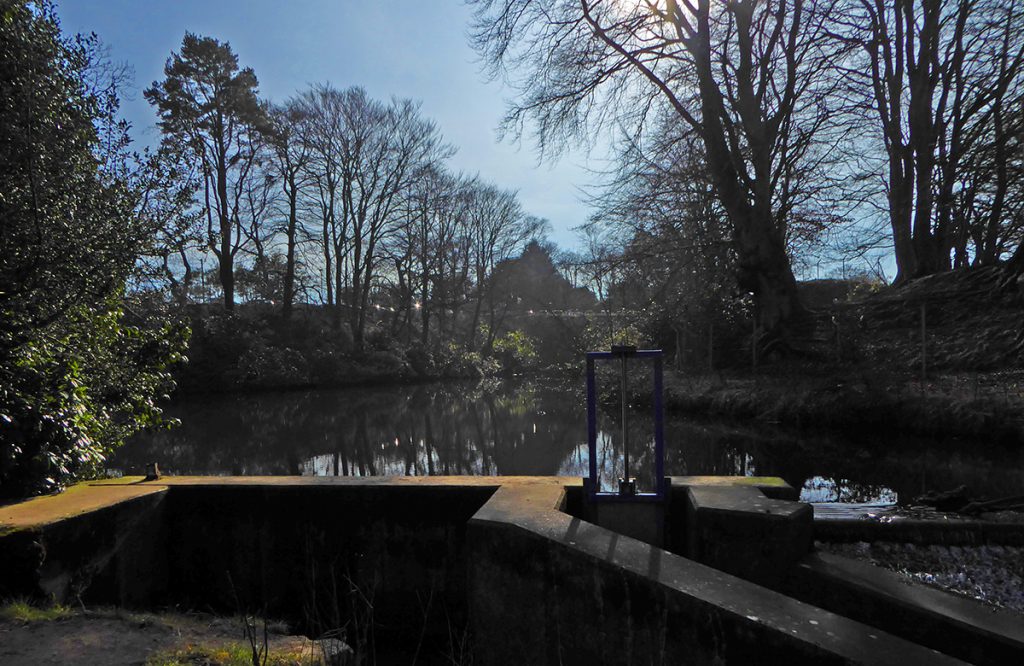 Took a quick look around the back of Bucksburn, hadn’t been along this way since I was a kid, when it was premium tree rope swing territory. Howe’s road is now blocked to traffic. 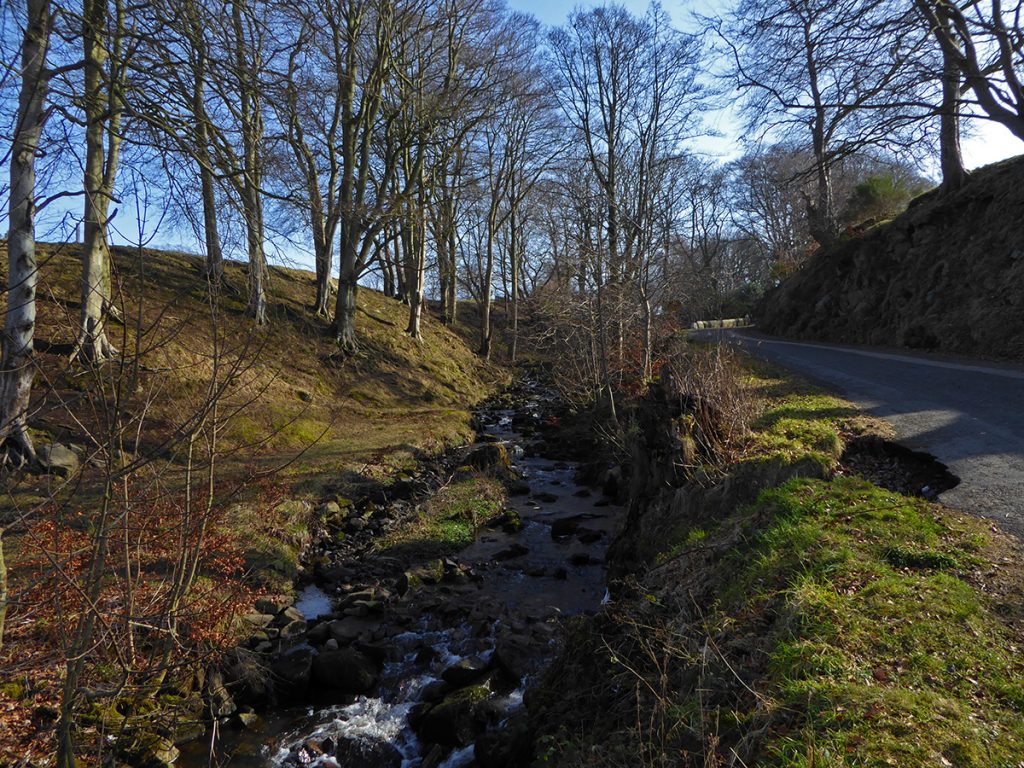 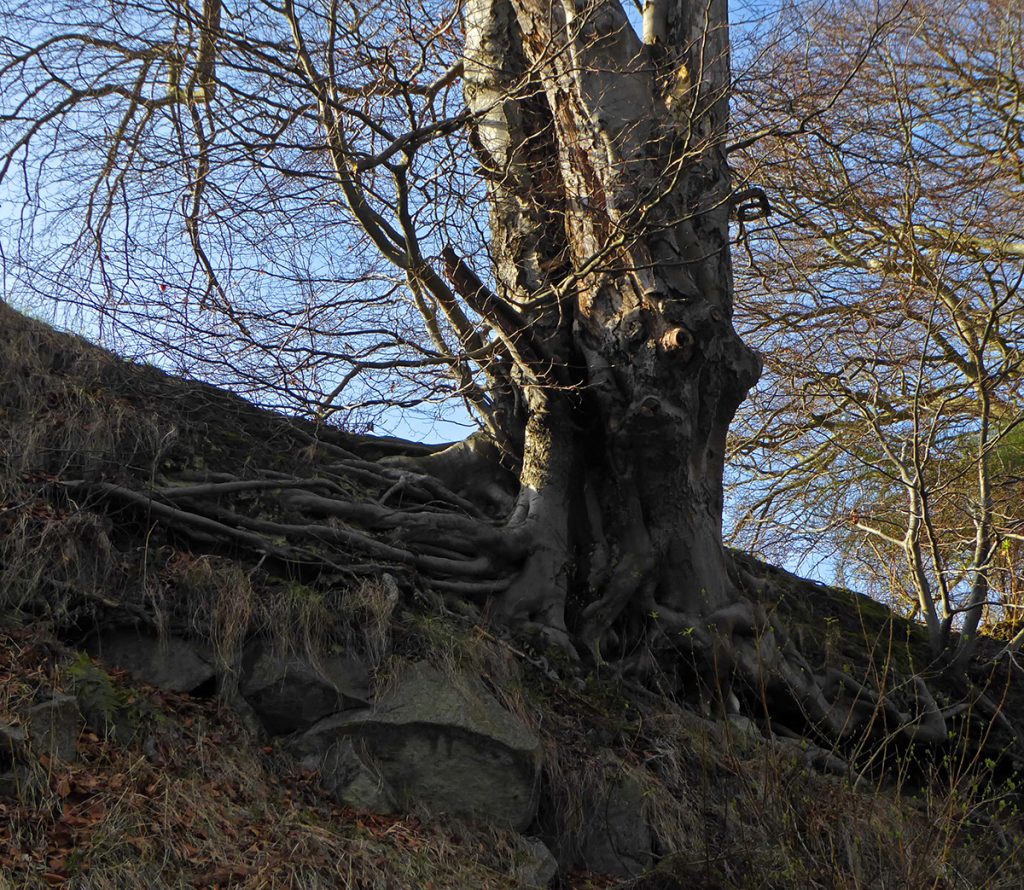 I said a cheery hello to a road cyclist climbing up Howes road. No response. Roadies are so serious and miserable sometimes, perhaps the lycra compresses their nuts too much. Maybe somebody needs to tell him it’s more fun to have fun :-/ I continued along some little farm trails towards Brimmond hill 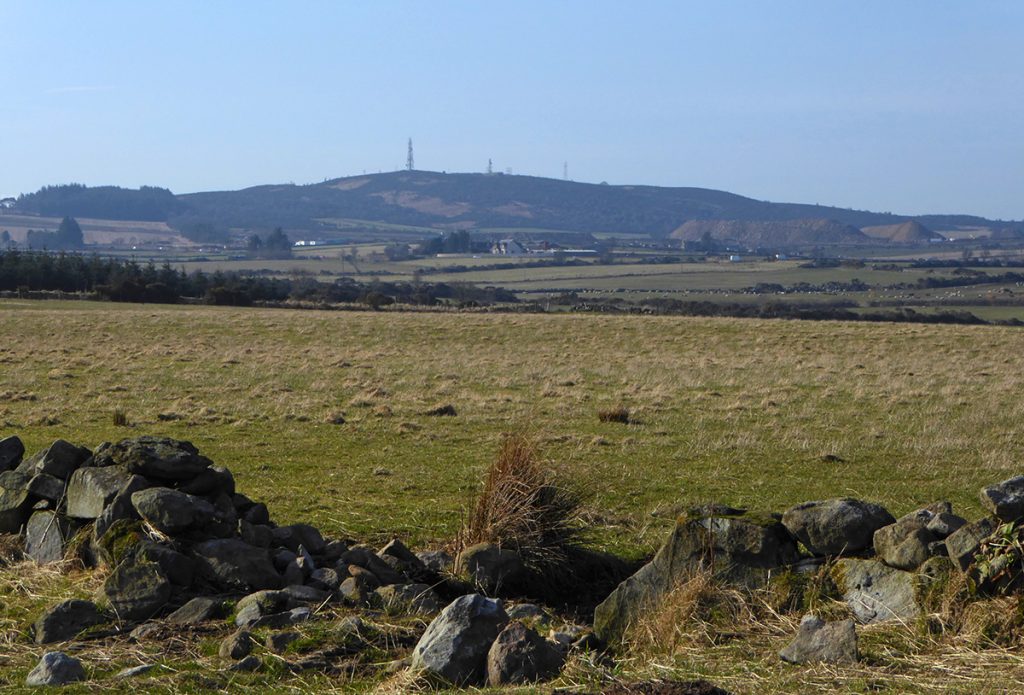 looking across to Brimmond hill

Choosing an option off OS maps.. looks like a decent track on map.. but this trail hasn’t seen much use. 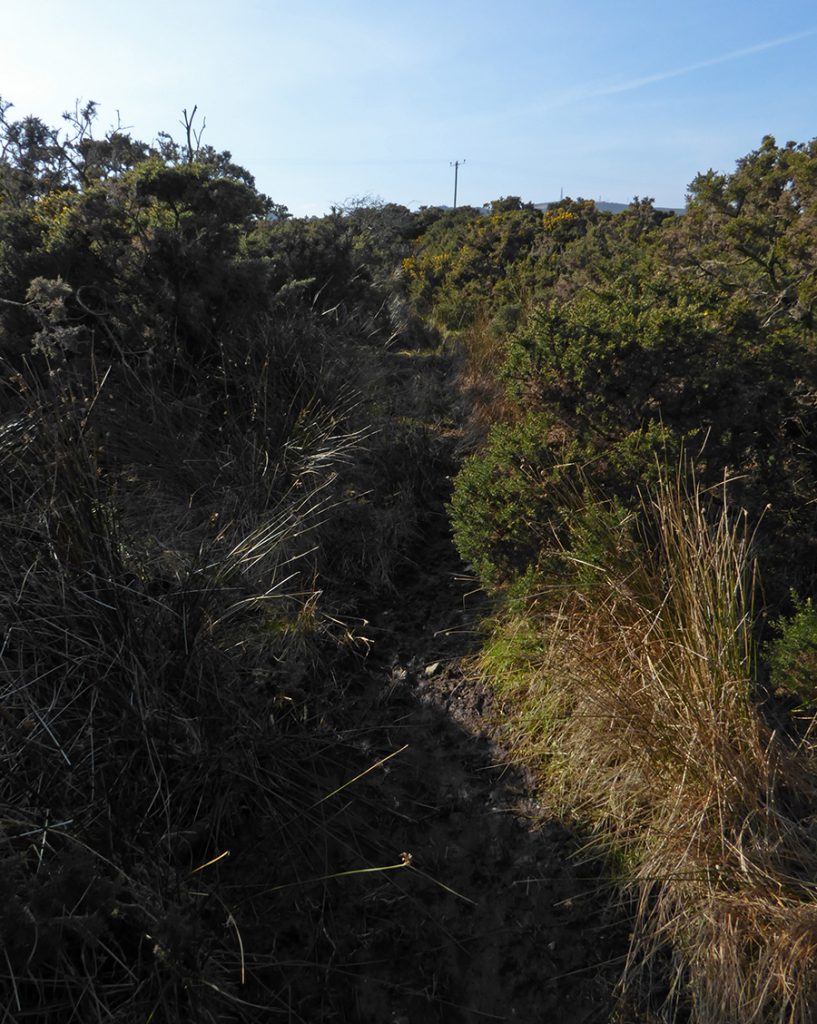 And sure enough it fizzles out into impenetrable gorse. Luckily I have a handy little saw thing with which I manage to hack a gap through into an adjoining field to continue. Quick breather and spy this wee fella.. summer is coming! 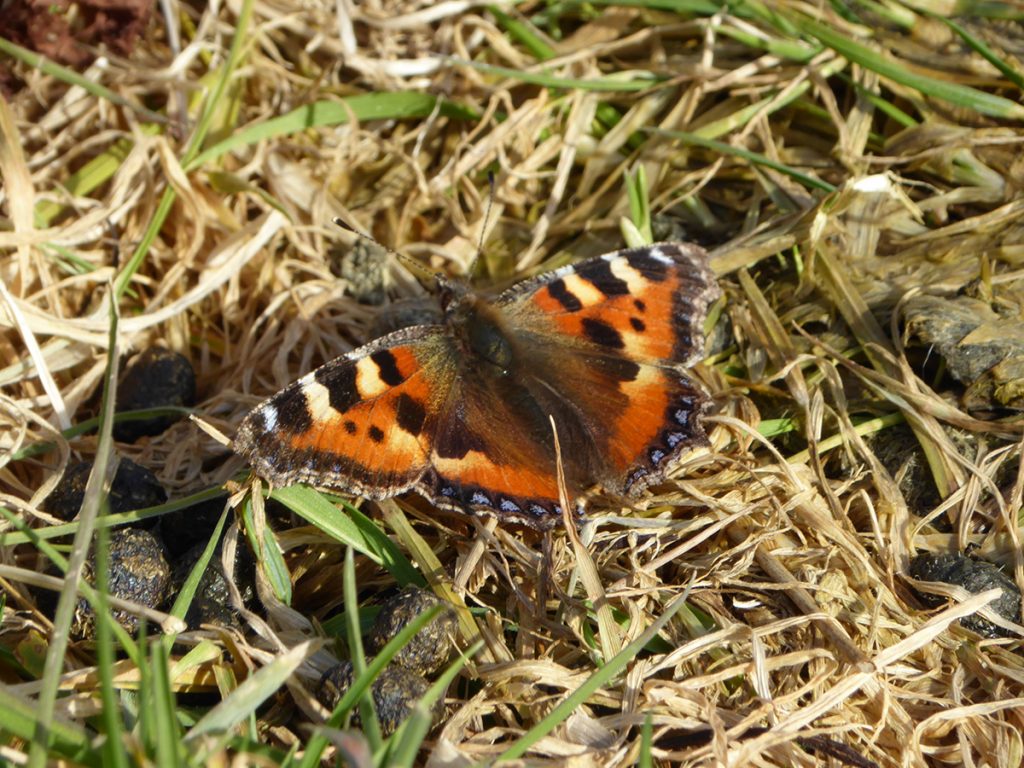 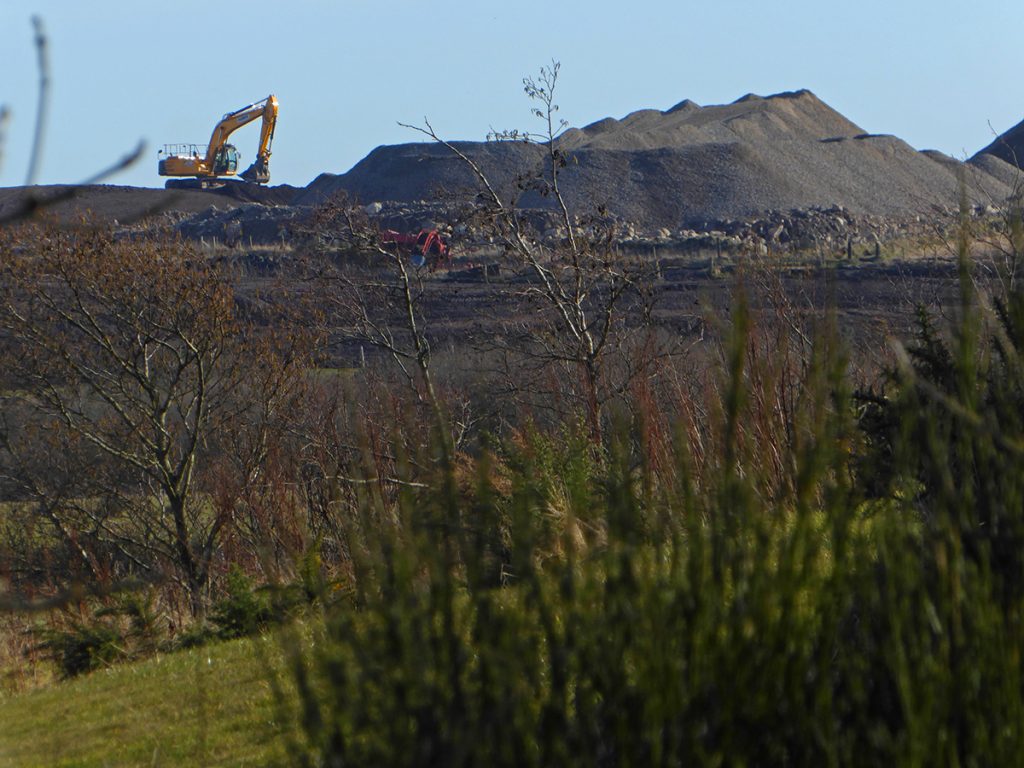 Back along the edge of West Wood 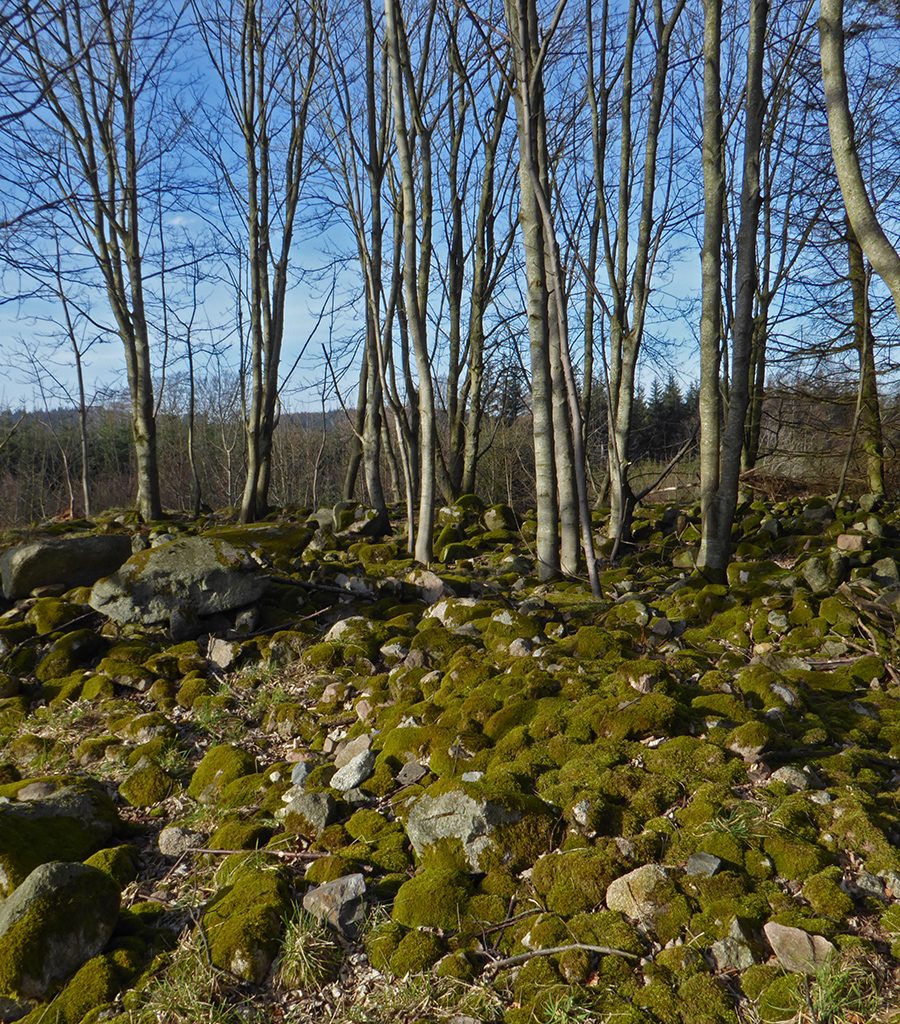 Along beside West Woods

Climbing up on Elrick hill keeping my eyes open for any sculptures, poke about down a couple side paths 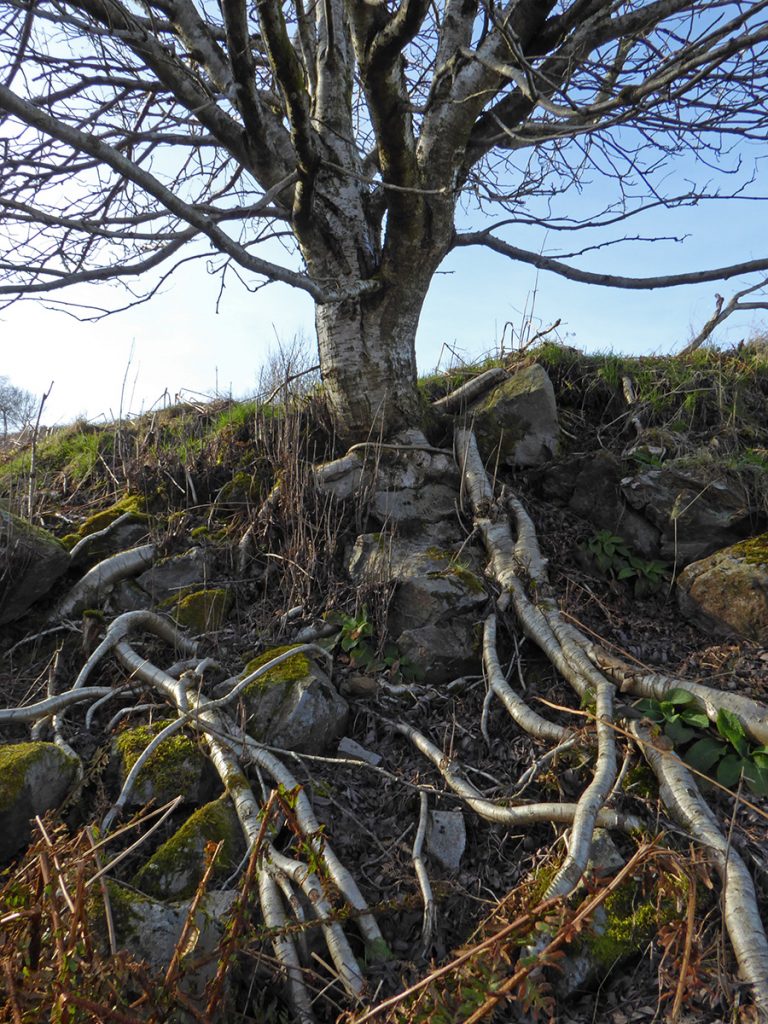 Nice shade in this leafy grove where one of the John Aiken marker stones is. 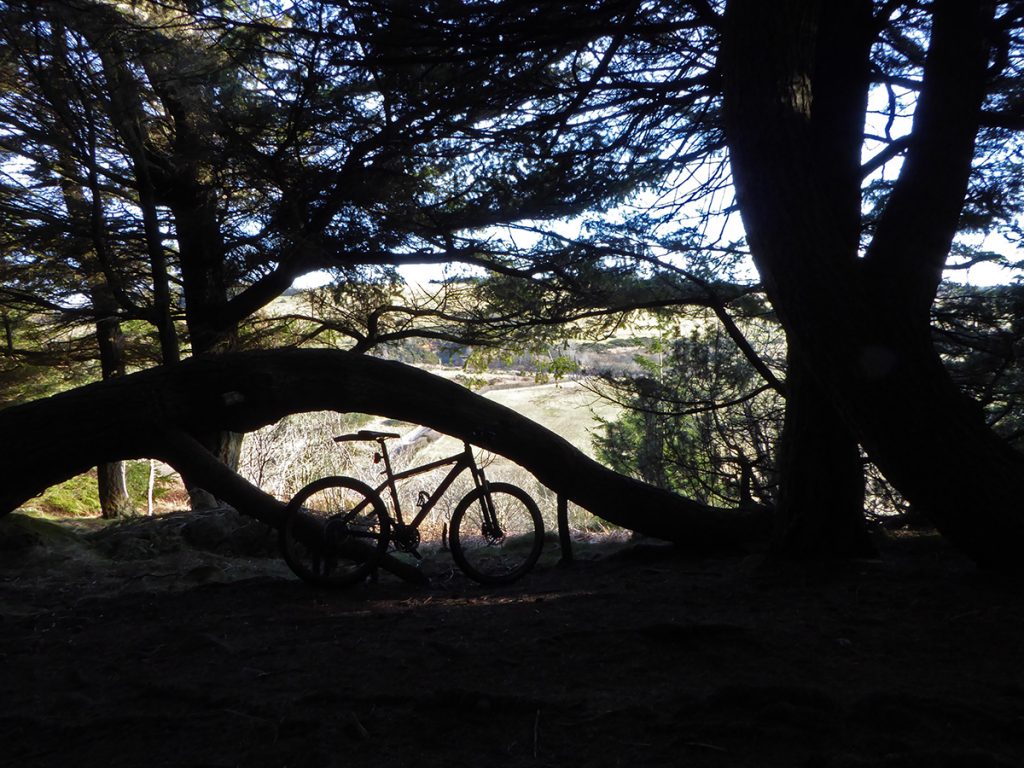 Quick pit stop in the shade

And a nice view 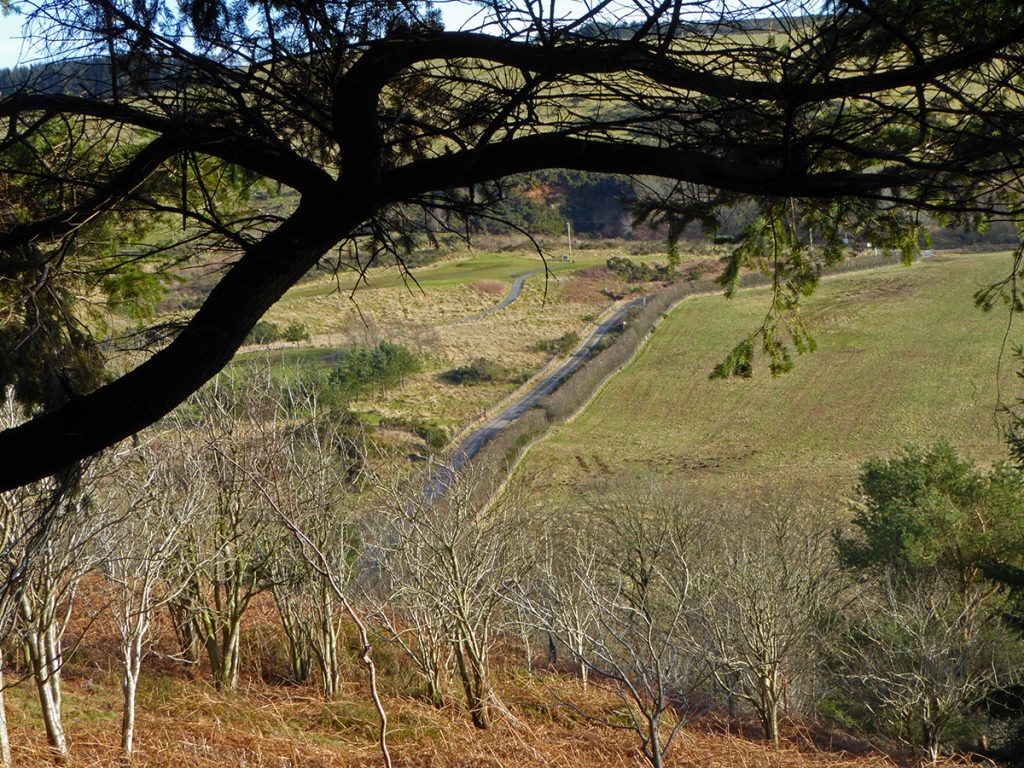 View back to the East

At the ‘modern nature’ sculpture I find this bolted down box which presumably provided the sound playback back when it was functional. 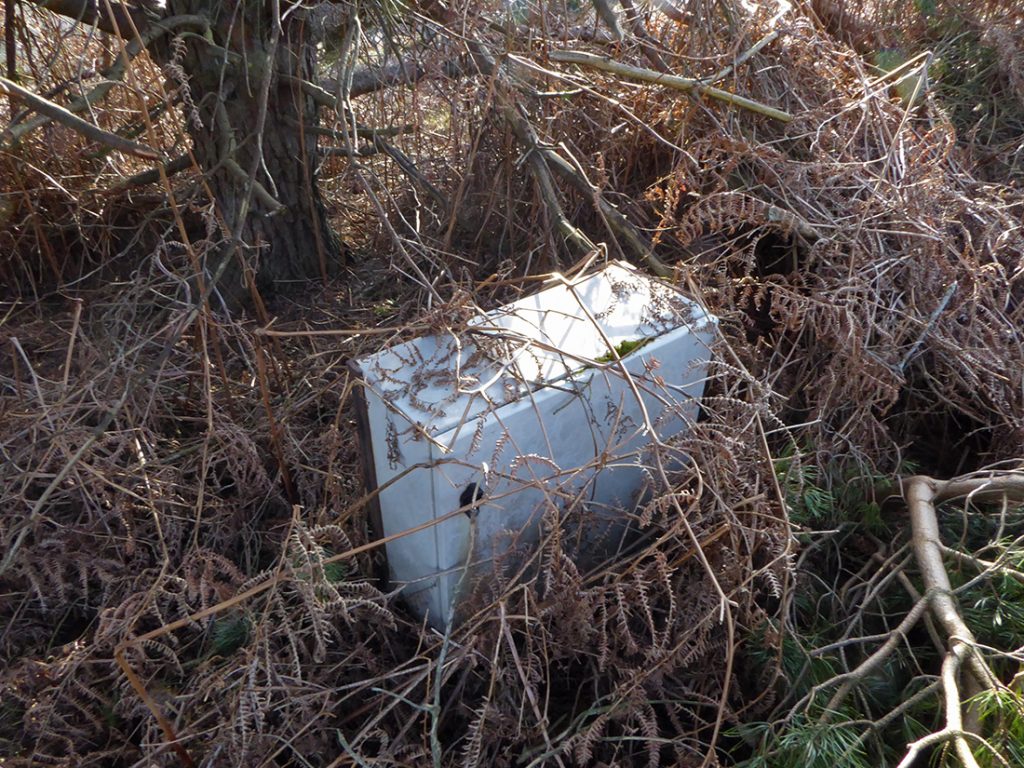 Fail to find a couple things marked on the old map (yet to see one of the bronze slugs if they still remain) but stumble on these sculpted benches, tricky to see as they match the heather colour. There’s 3 that I could see 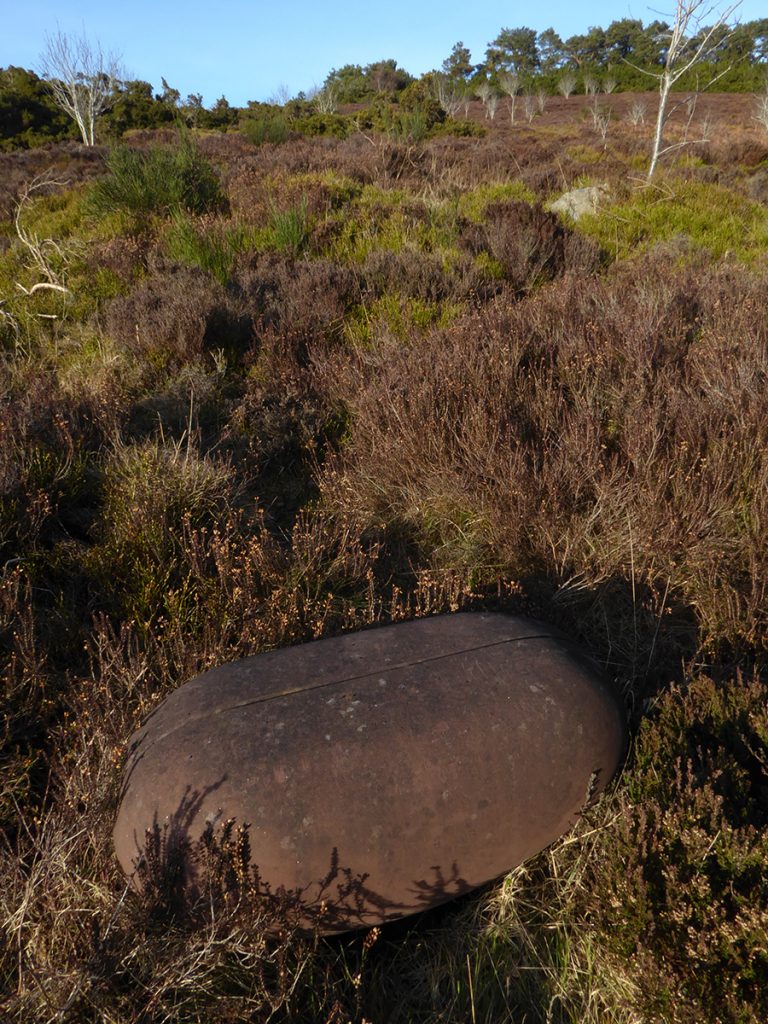 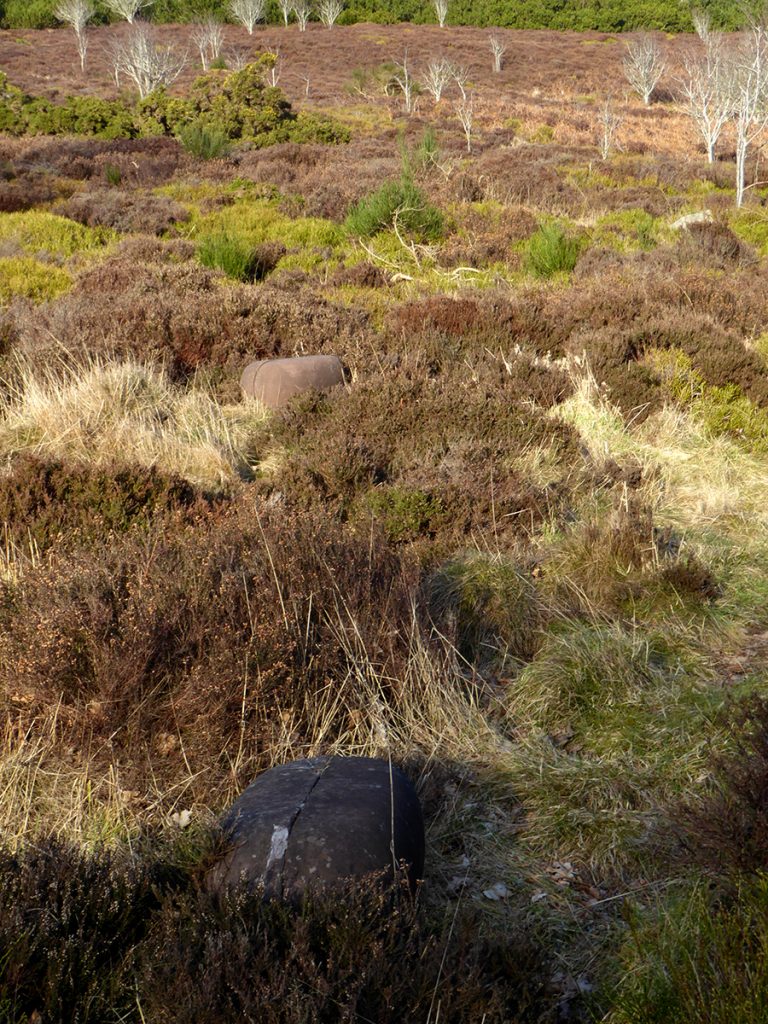 Hazy view to the West 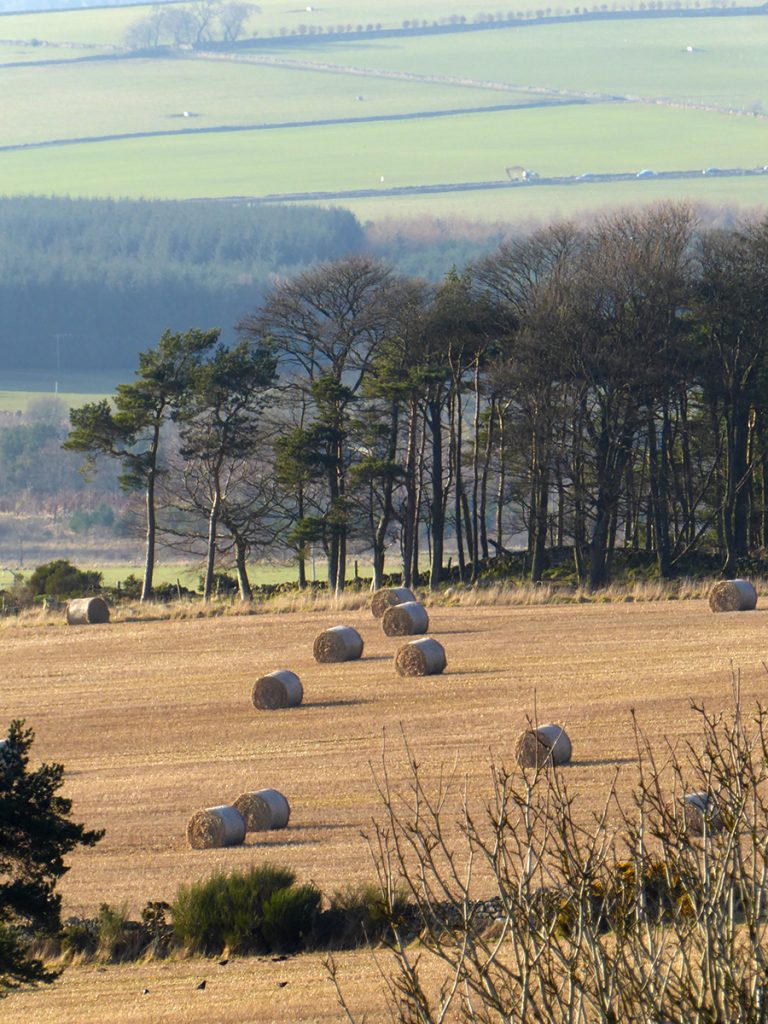 View to the West

Back at the ‘Sky Lines pillars’, this time forewarned about the holes. Also, I notice one of logs to the rear on the ground. Although I count twelve upright as described, perhaps a spare as opposed to one fallen. 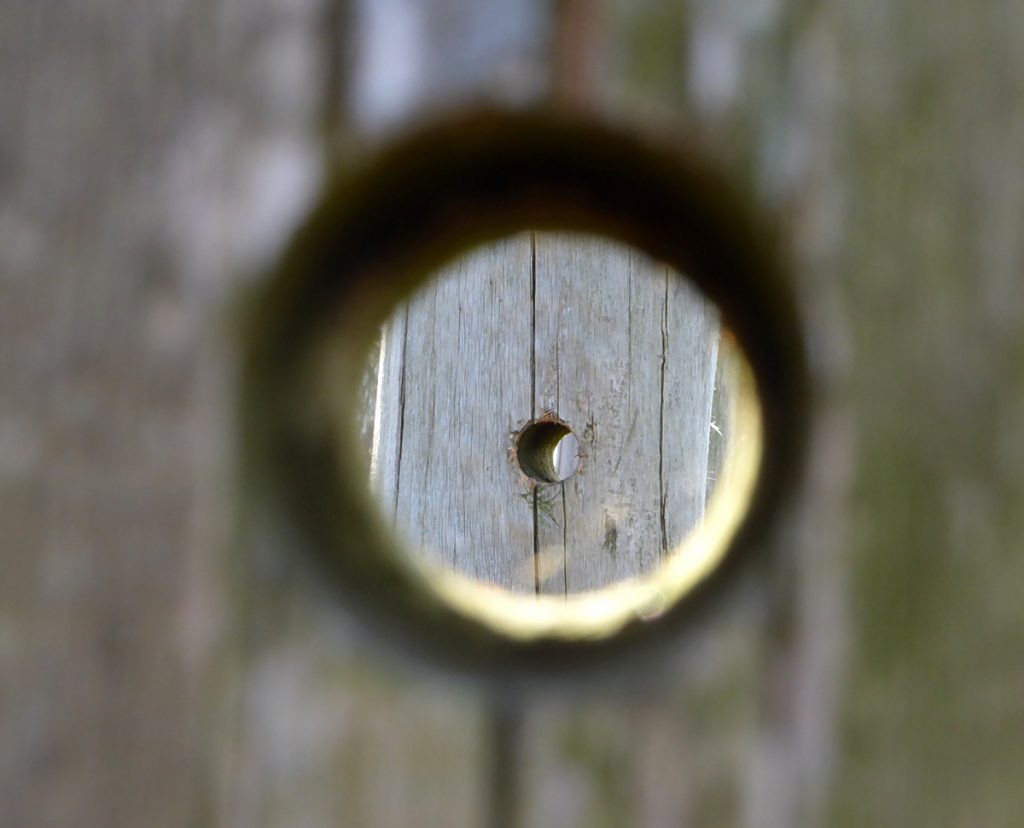 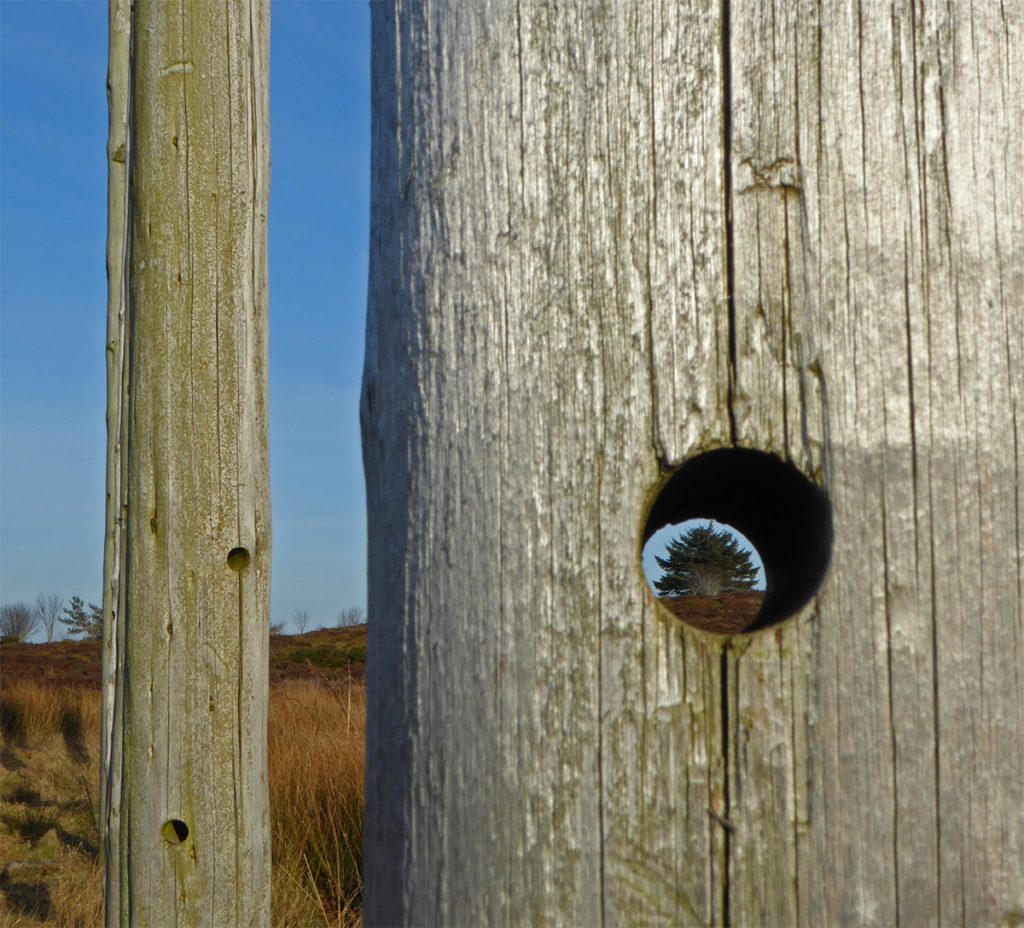 Just about lining up a feature. Think I’d have had them less random and pointing at features 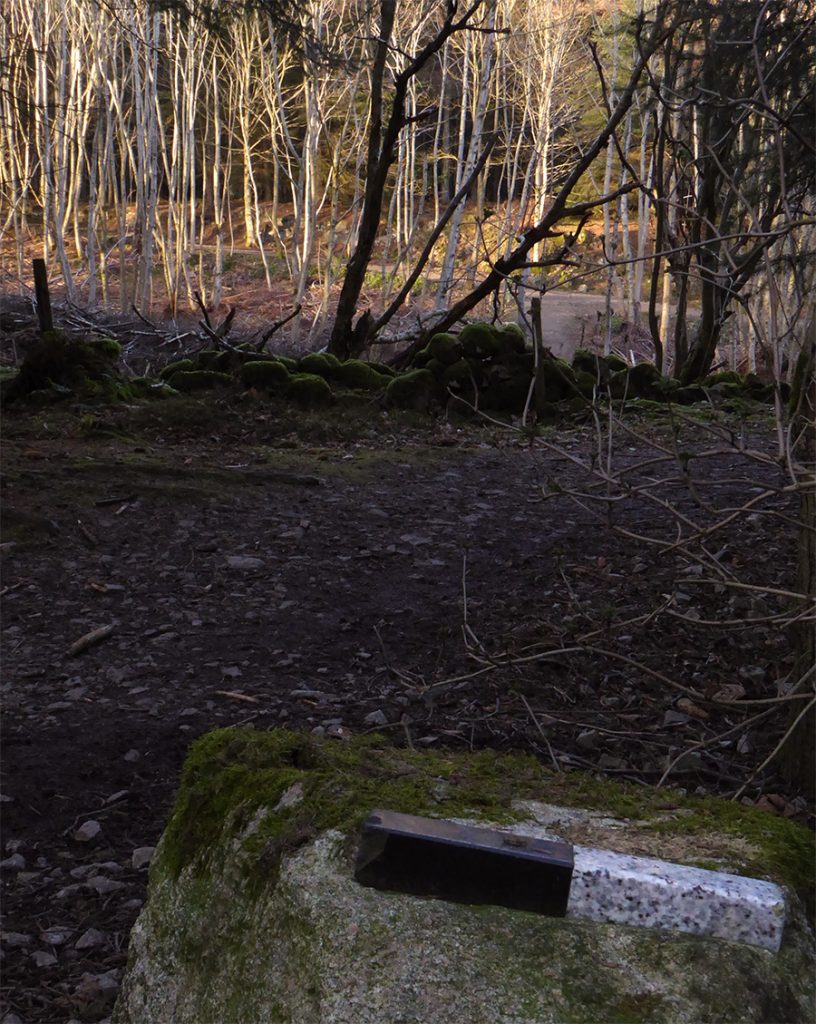 Another marker by John Aiken

Just beyond lies Stepping Stone by Simon Beeson, which he described as “part Forth rail bridge, part park bench”. Historic photos of the location show a more pleasant tree filled surround. The setting is now a large area of brutally cleared forest, with no sign of replanting or clearing of debris. Slow hand clap for the forestry or council workmen who thought that was a good idea. 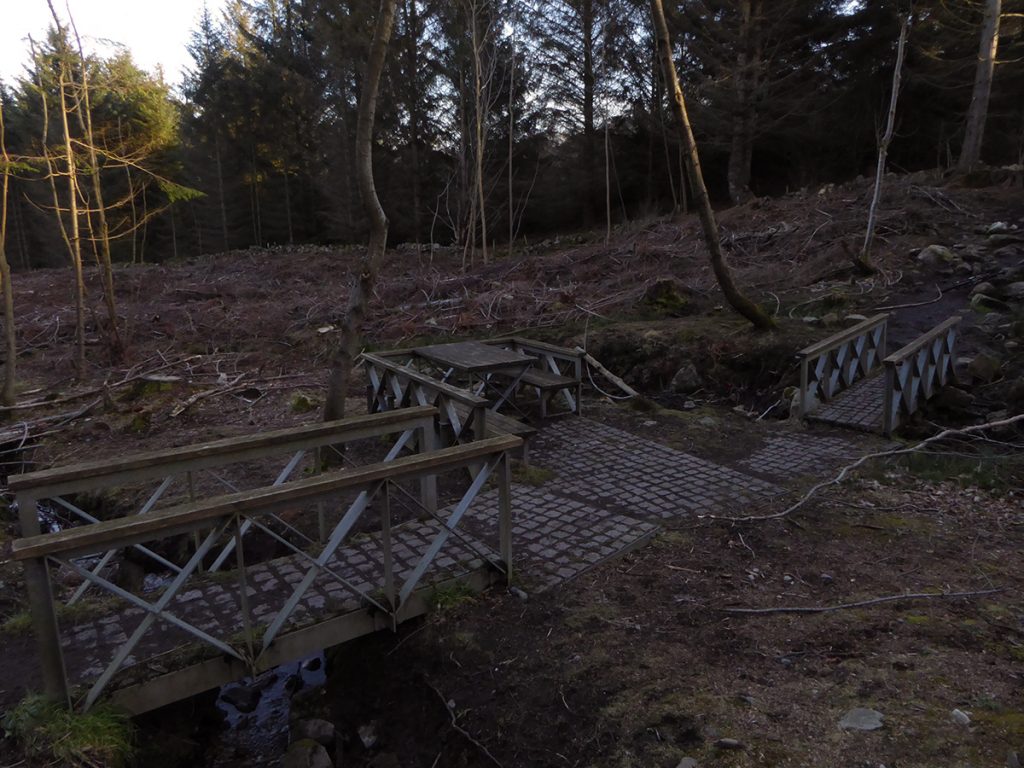 Heading East along the trail, no sign of ‘Apparition’ by Auke de Vries, a metal deer’s head apparently hung high in the trees, or debris from it falling off. Googling shows evidence of it still existing in 2013.  ‘Ghost’ by Simon Ward is easy enough to find, though not visible from the trail, there’s steps heading up. It’s about 20m uphill from the trail. 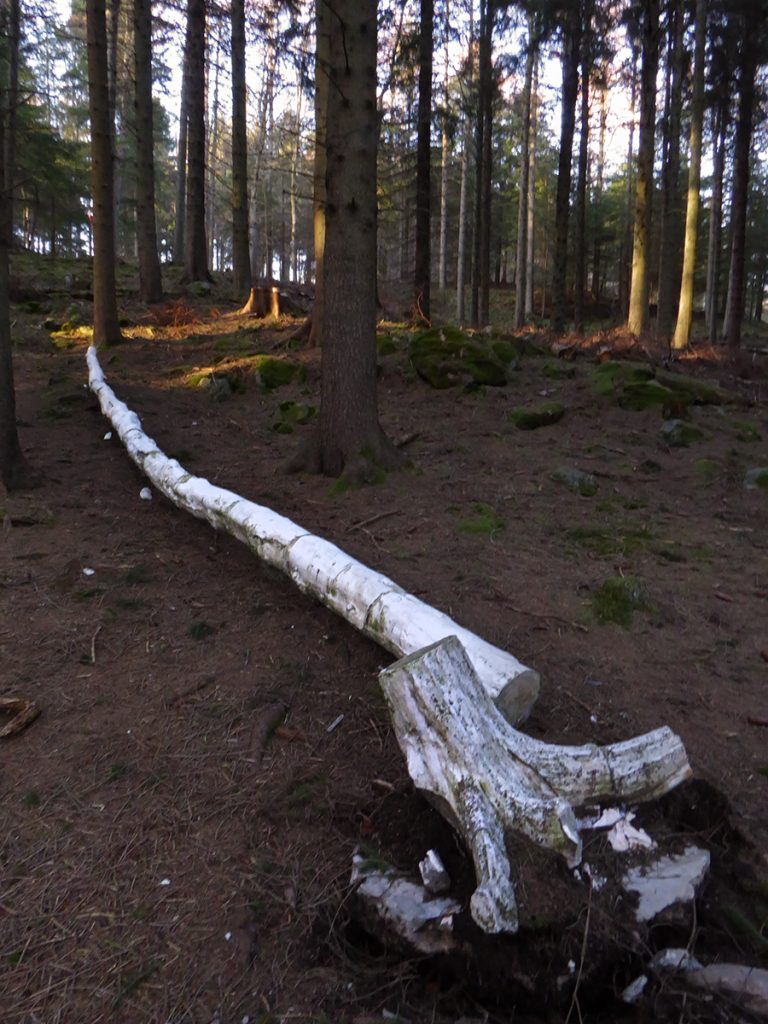 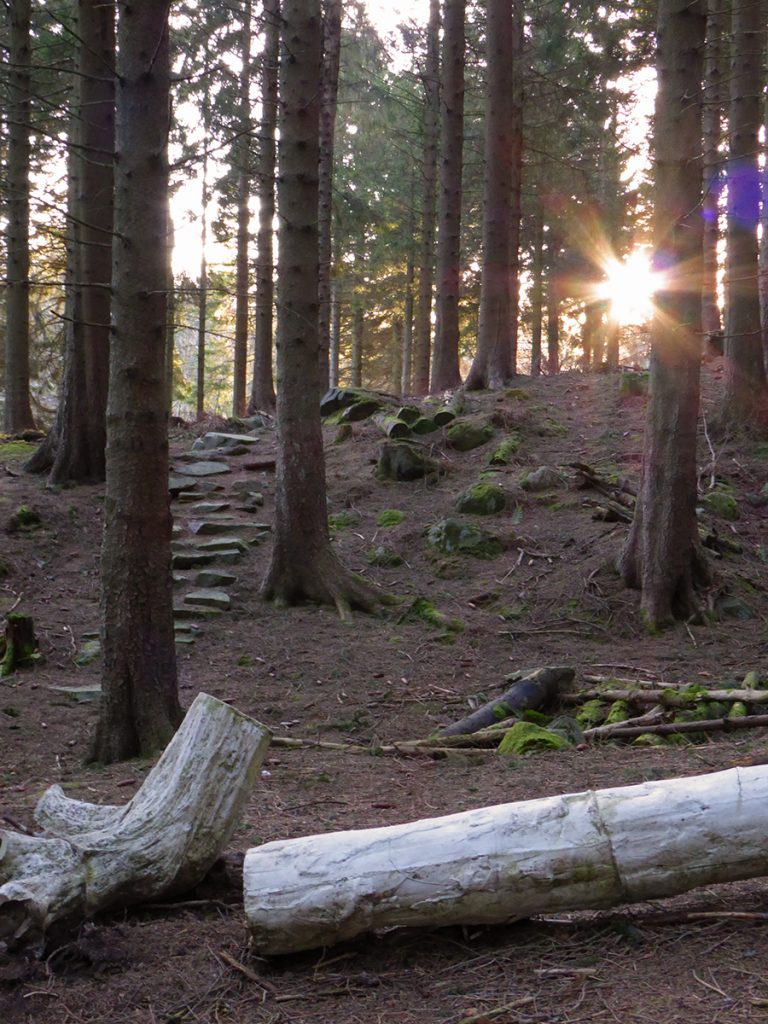 Slightly further East is Robber’s Cave, now filled in and blocked off. 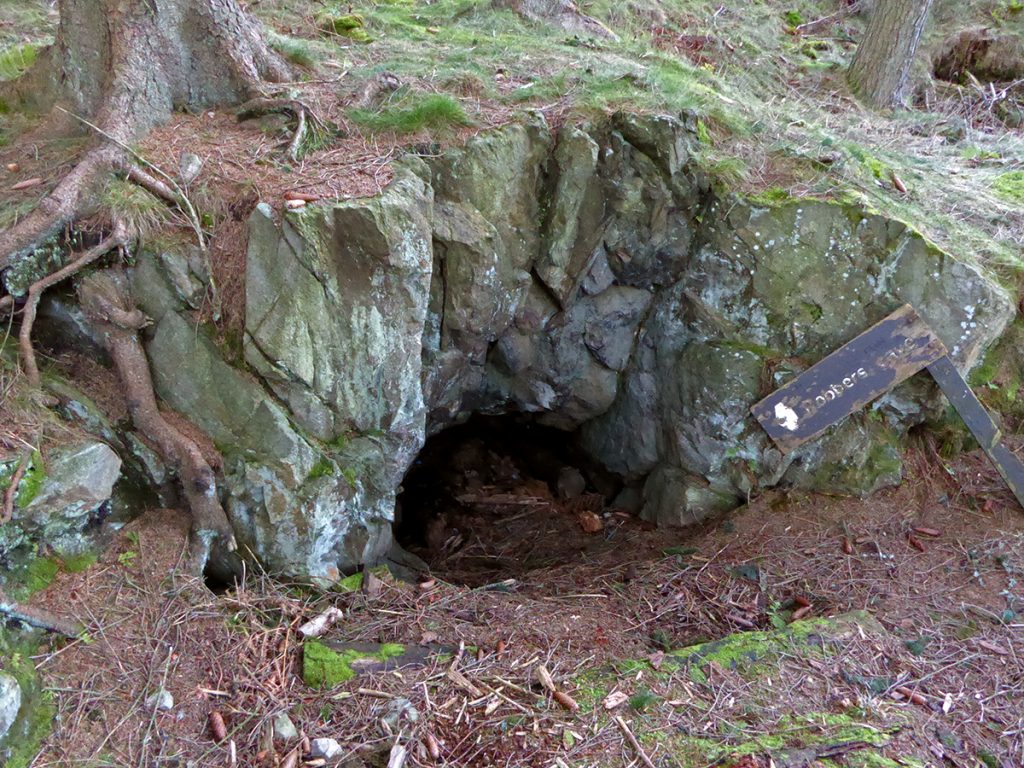 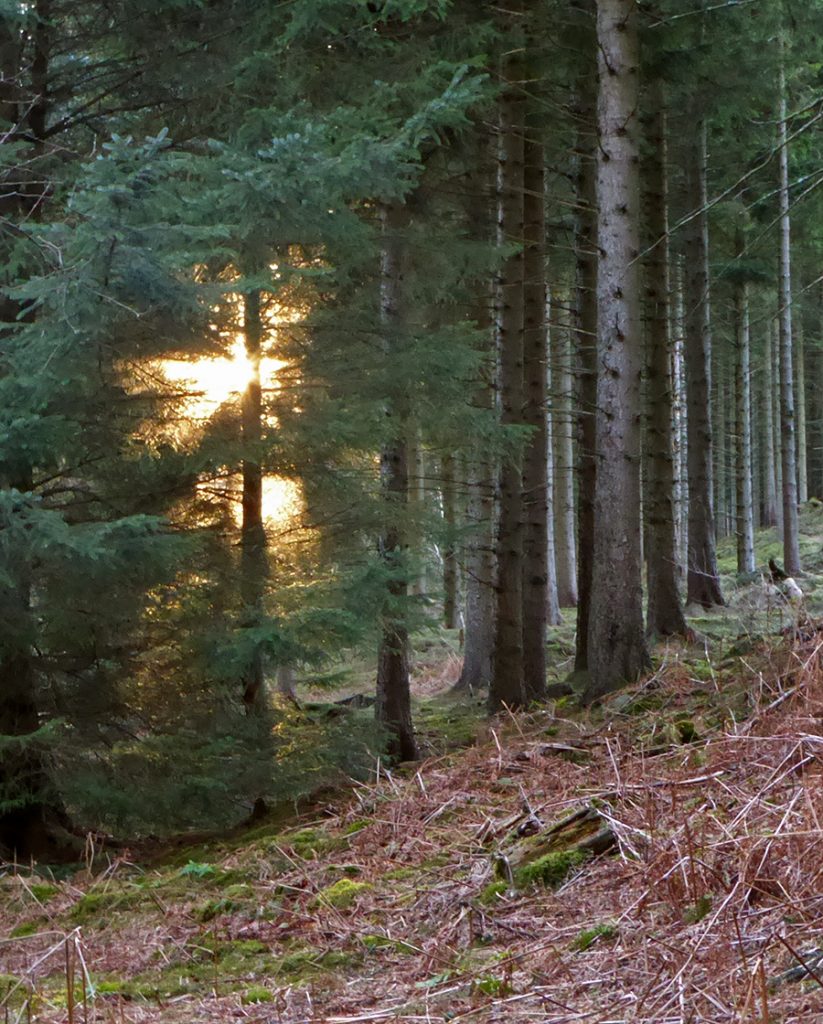 Sun setting through the trees 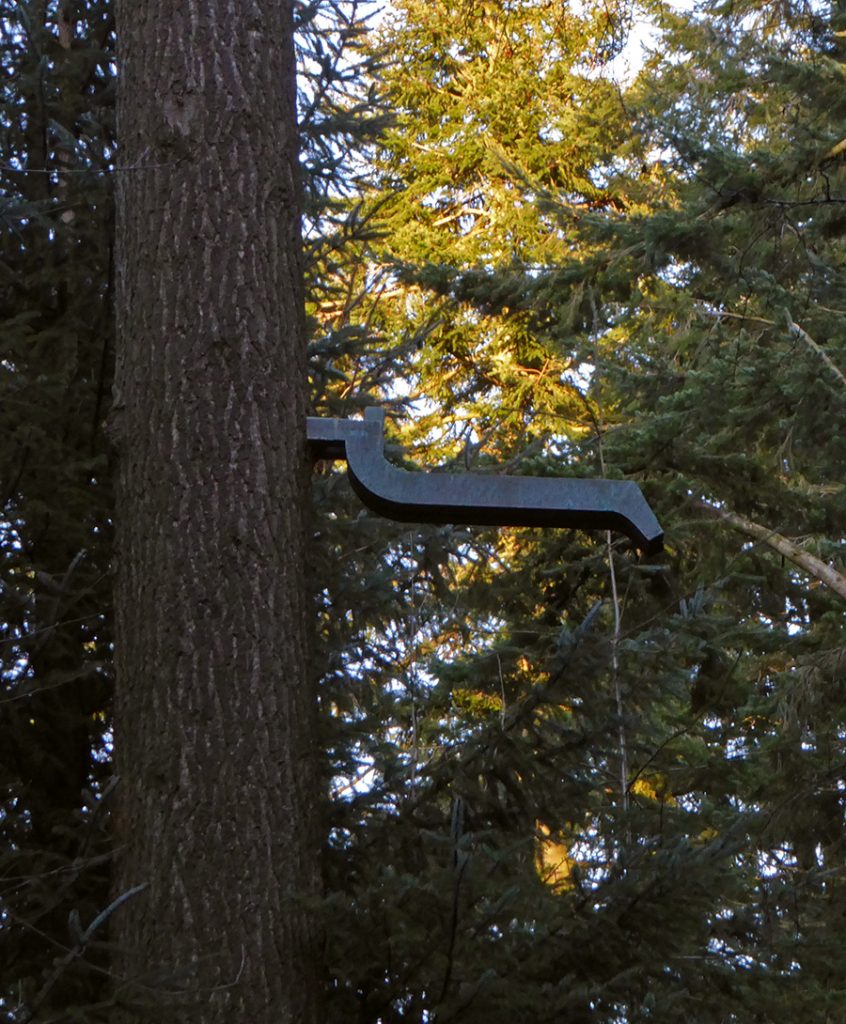 Heading North, there’s another area of obliterated forest. Amongst the wasteland, my eye picked out some logs that have been machined, and aren’t just more forestry debris. Also some black plastic.. 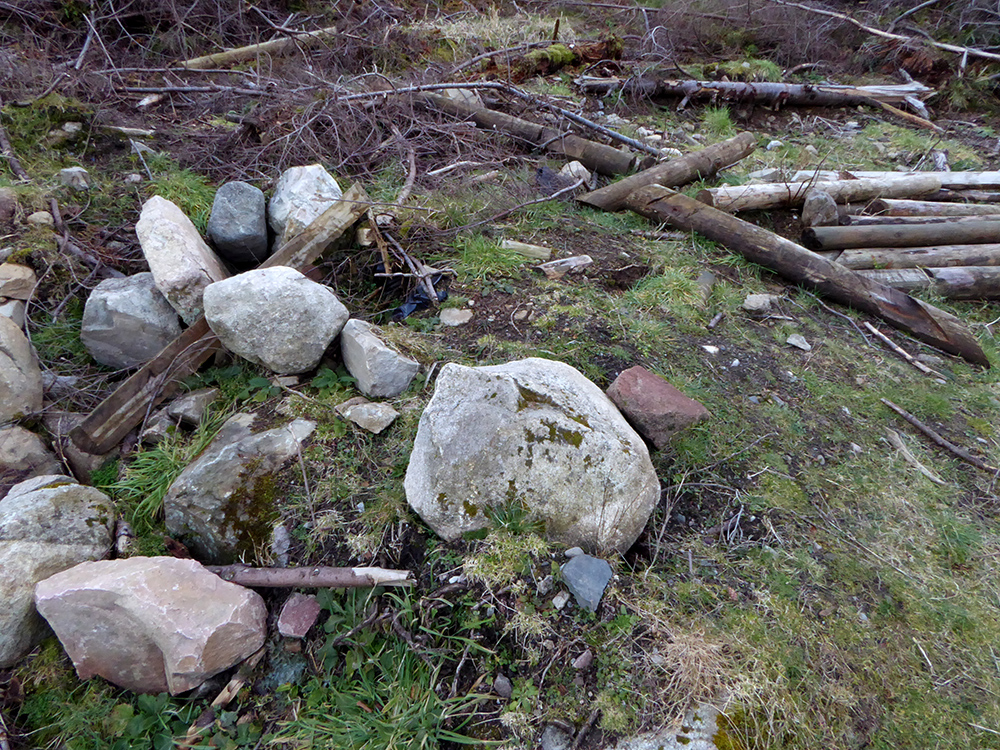 Thick buried black plastic and logs. This is the remnants of ‘Earth Chamber for the Trees and Sky’ by Chris Drury. Guess somebody should have clued up the forestry folk before they went in all guns blazing. 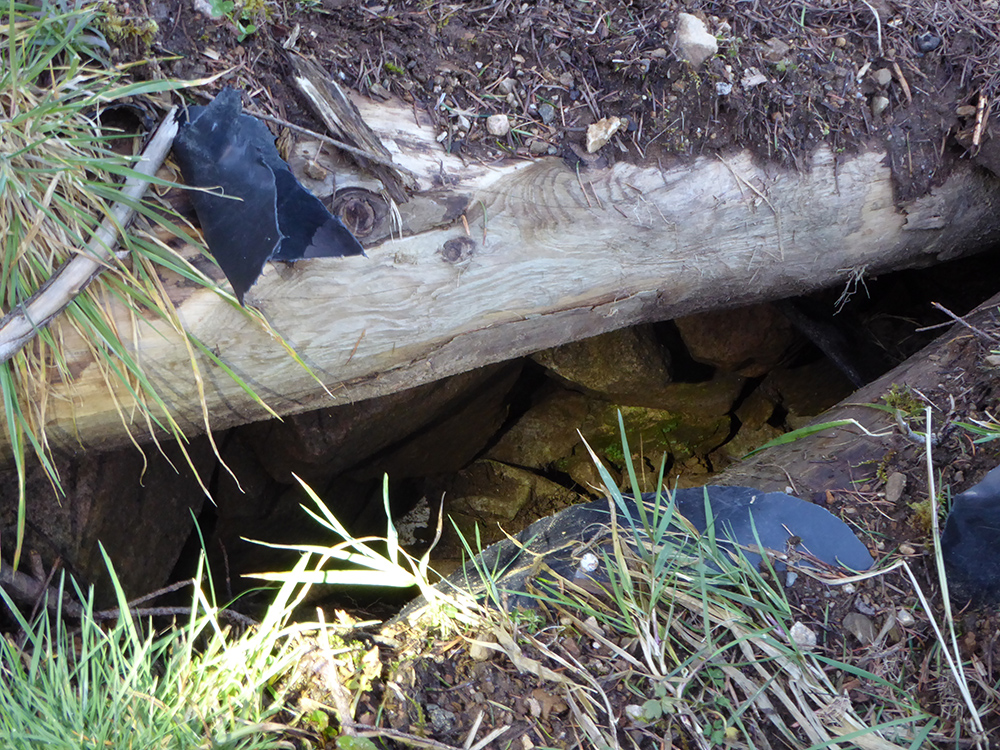 Heading home now, found another John Aiken marker in the stream beside a small foot bridge 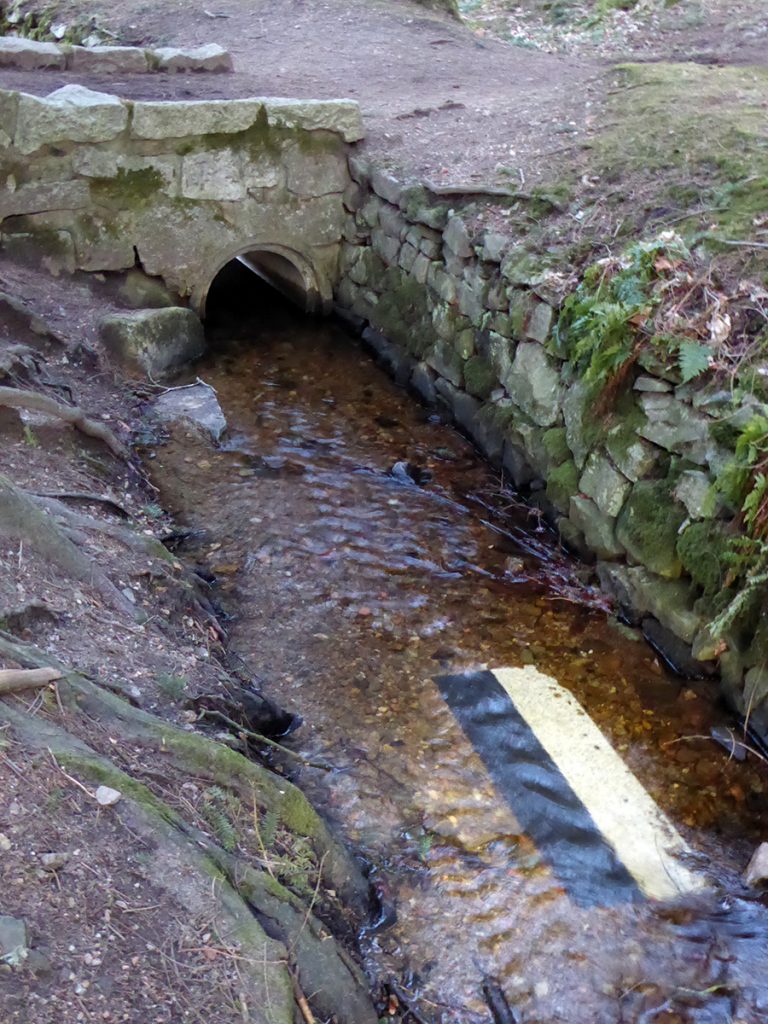 There are a few photos on geograph of some of the sculptire that I never saw:

Took a different route through West Wood, down an unmarked path. It’s got old walkways over some boggy ground so guess it must have been part of a walk at some point. 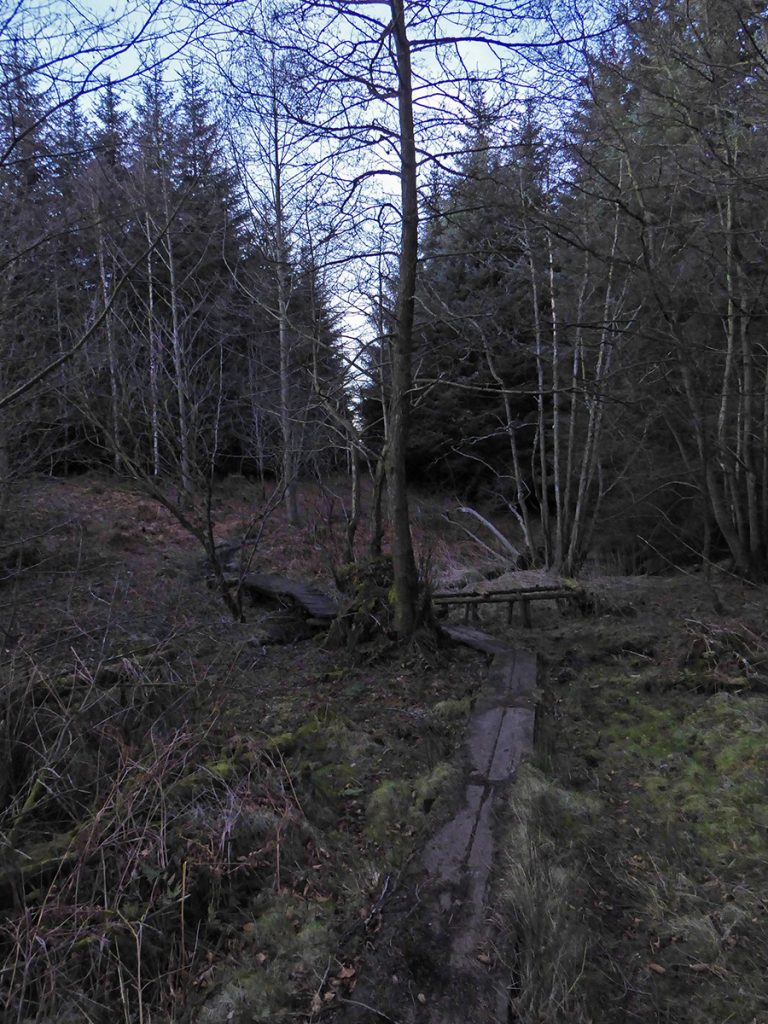 Down the hill I see other MTB tracks, which lead off into a deep mud fest. Think I’ll give that a miss and head back for a cup of tea and a biccy 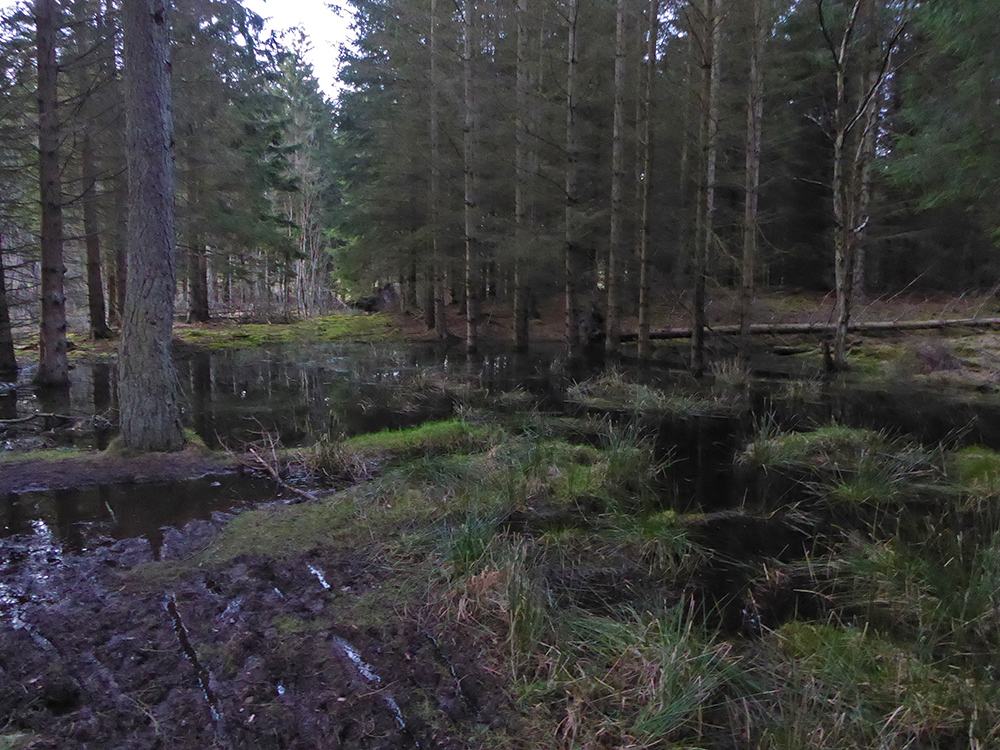